G7's newest firmware 3.430R1 is coming! It will be rolling out March 20, 2020. This release will be sent out over the air to our European customers — a global release is scheduled to follow in April 2020.

This firmware update includes a variety of new features:

Scroll down this page to read more about each feature, or select a specific feature from the list to jump there automatically.

Blackline Safety is very excited to partner with NevadaNano for the release of the LEL-MPS sensor. This sensor leverages NevadaNano’s Molecular Property Spectrometer™ technology to measure properties of detected gases and identify what kind of gas is being detected. This sensor delivers rich sets of data in seconds, making it a valuable asset in emergency response and in site analysis.

Blackline Safety will be launching new G7c variants that include LTE modems. Contact your distributor or our Customer Care team for more information.

G7’s PID sensor will be improved with the ability to detect more target VOC gases than ever, and with improved accuracy. This update will also include the ability to configure our PID sensor to a custom correction factor, accommodating for target gases that may not be on our list.

NOTE: For the initial release of this update, the PID sensor will not be supported by G7 Dock, and will need to be bump tested and calibrated manually. Support for PID in G7 Dock will be part of the global release of PID sensor support in April 2020. 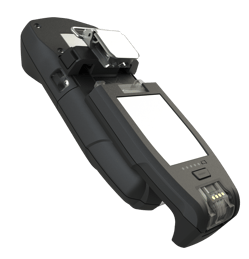 G7 PowerPack is an external battery accessory that clips to the back of your G7c and G7x wearable devices to double their regular battery-life. This means under normal working conditions, G7 can remain operational for up to 36 hours.

G7 PowerPack only takes four hours to charge, whether attached to G7 or charged separately.

This change will help to ensure that a user’s exposure to toxic gases is being accurately measured, even if G7 is turned on and off throughout the duration of a shift.

This feature will be available upon request. Please contact our Customer Care team to gain access to this configuration option.

OPTION TO CONFIRM AUTO-ZERO ON STARTUP

The G7 configuration profile will now include an option to confirm auto-zero on startup. When this feature is enabled, the user will see a screen at the end of the startup sequence asking if they would like to run an auto-zero.

The user will be able to choose whether to run the auto-zero or skip it. If they do not respond to the screen, the auto-zero will be skipped. Keep in mind you have the option to run a manual zero later by navigating to “gas options” in the main menu and selecting “manual zero.”

This feature will be available upon request. Please contact our Customer Care team to gain access to this configuration option.

Have questions about the 3.430R1 firmware update, G7 products or otherwise? Contact our Customer Care team.