For our EU and International customers, we have added support for the LEL-C Pellistor sensor to our EXO portfolio. A pellistor (catalytic bead) sensor may be preferred in certain situations, for example: for compliance with existing standard operating procedures.

While the MPS technology has many advantages, in certain situations, customers may need to continue using the pellistor (catalytic bead) sensor.

EXO’s battery resolution can now be set in increments of 1%, changing from the previous increment of 10%. This will allow EXO users to set their low battery alarm with days left instead of weeks, allowing them to use the battery for longer.

EXO will now send status updates to the portal every 30 minutes by default, where previously, it would send updates every two hours. Examples of status updates include location settings, signal strength and gas readings.

EXO has used three distinct alarm sounds since it was first released. Blackline Safety has discovered after years of G7 EXO being used in the field that some lower urgency notifications on the device — like low battery or bump test reminders — interrupt work and demand the worker's attention for something that may not need to be addressed immediately.

To better communicate EXO's needs to our end users, Blackline Safety is introducing a new sound for lower urgency events.

This new sound repeats itself on a loop until it is acknowledged by pressing and holding the up and down arrows. Unlike EXO's current sounds, this pattern is designed to appear less urgent so that users know they are not in danger when they hear it.

This sound will be used for: low battery, bump test and calibration reminders, network connection loss and the timer feature.

The gas alert countdown is an optional gas feature that creates a short delay before an alert is delivered to Blackline Live.

This new feature on EXO will help prevent false alarms from being delivered to monitoring services. Gases like CO and O2 can spike and dip very quickly, setting EXO into high gas alarm even when gas levels go back to normal. 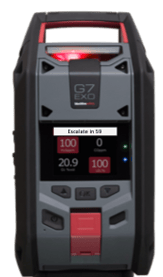 How does the gas alert countdown work?

When the gas alert countdown feature is enabled, the device will wait a configured amount of time before sending an alert to monitoring personnel.

EXO will still display red lights and an alert siren sound so that the user knows to leave the immediate area. The banner at the top of the screen will show the remaining time before an alert is sent to Blackline Live.

If gas levels return to normal before this time has elapsed, the alert will be cleared. The gas exposure will still be visible in the device history view on Blackline Live, but will not appear as an alert in the Alerts list.

How do I set up the gas alert countdown feature?

The gas alert countdown feature will be turned off by default. To set up this feature:

When the devices have successfully received the new settings, the gas alert countdown feature will be enabled. 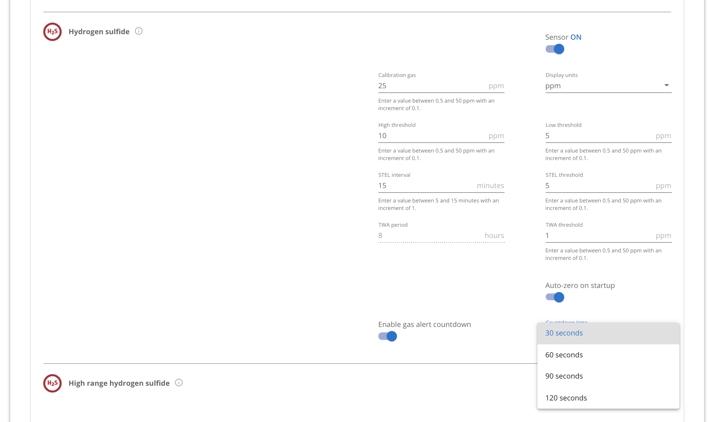 EXO users will now have the option to display their local time on the device screen. They can:

Instructions on how to set local time on the device will be in the EXO User Guide (R8).

EXO now includes a feature that allows you to set a timer right on the device. The timer will run in the background while you are using other features on the device. EXO will use the new information sound to inform you when the timer finishes.

Instructions on how to set up the timer feature will be in the EXO User Guide (R8).

EXO now has an option to start a stopwatch on the device. Once the stopwatch has started, it will count up in one second intervals.

The stopwatch will run in the background while you are using other features on the device. It does not have an end time or use an alarm.

Instructions on how to set up the stopwatch feature will be in the EXO User Guide (R8).